When are hosts most available? 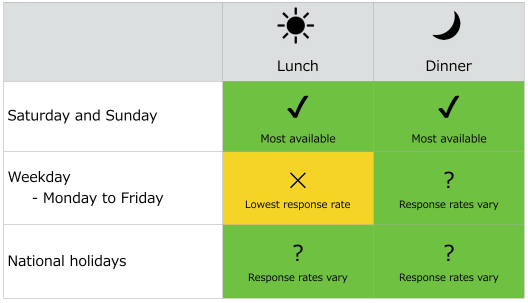 Green dates are highly recommended and yellow dates might be more difficult.

Weekend for lunch and dinner, most available
Weekend lunches and dinners are your best bet. Most hosts are more available because many are off from work on Saturday and Sunday.

National holidays, response rates vary
Most hosts will have days off during the national holidays so we still recommend including it in your request . We only mention that the responses may vary because there are hosts who might be away from home on vacation or spending time with extended family during some of the biggest holidays of the year in Japan like Golden Week during end of April or early May, or New Year holidays around December 29th to January 3rd but there are some who will be available because it is a national holiday. As for other shorter holidays hosts tend to be at home and available so we also highly recommend still sending requests during those dates.

Weekday lunches, lowest response rate
Weekday lunches get the least responses because many are at work during this time. However, if it is the only dates and times you are available we still recommend sending a request since we do still have hosts who have flexible work hours or are retired and have more flexible schedules.